Why should you use a semi rigid orthotic?

A major benefit of our semi rigid orthotics is that they are custom made for your foot. When you buy something from a shoe shop or and off the shelf orthotic with a practitioner, it will be made for a million people, whether it is correct for your needs is debatable. This can be equated to buying your glasses at the petrol station instead of from an optometrist. Getting custom orthotics from a practitioner is better.

In our assessment, you walk over our Gaitplate so we know the exact size of your foot and the amount of pressure going through each part of it. This is a great replication of how your foot functions as you would normally walk or even run (our equipment is fast enough to capture this). A common alternative at other clinics is video assessment done on a treadmill however because you don't need to propel yourself forward over the ground (the treadmill is already moving) it gives a altered measurement of your feet.

The manufacturing lab we use can take either our electronic Gaitplate scans or the plaster / foam box casting that often happens with traditional orthotics. They have found that there is a lower error rate with the Gaitplate analysis than there is with the manual casting. It's widely accepted there is human error in casting feet in traditional methods. The computer analysis also makes it clear to you about how your feet are functioning  In their natural state.

The next advantage is that most of the benefit of foot orthotics is the change in proprioception (joint position sense) so that the muscles are told to contract with a different intensity and timing with the semi rigid orthotic under the feet. This provides a level of conditioning to make your feet and legs work more efficiently and effectively with the aim of removing and preventing conditions related to your feet, legs and low back.

Another advantage is the orthotic base material We use is a memory thermo plastic. This means the shape in the plastic is set at very high heat and it will always return to its original shape after compression of your foot and it will not lose shape over time like other semi rigid plastics. Also, if the plastic breaks it has a warranty of a free replacement.

When you buy a soft orthotic as you can see in the video below, it is not made specifically for your foot so error could occur there. Then the more you compress the foam, the harder it will get so it ends up more like a hard plastic under enough loading. Over weeks or months, the foam will end up staying compressed until it gets harder or deteriorates too much and needs to be thrown out (maybe even by 6 months). You might also find the arch or the soft foam foot orthotic on the inner arch doesn't contact your shoe and therefore just collapses until it does contact your shoe. This is understandably ineffective.

Rigid orthotics some from a thought school that the arch needs to Always be supported up at its optimal height however this takes away from the natural cushioning of the foot when it first lands down on the ground. With limited give in the rigid orthotic, jarring can be transmitted to other areas such as the ankle, knee, hip, pelvis and low back. In contrast, the semi rigid orthotic allows some ‘give‘ while still maintaining support at its most essential time.

There are many common foot and ankle problems and they can be experienced by people of various ages. A lot of conditions are related to over pronation (rolling in) or over supination (rolling out) of a foot during standing or activity (such as walking, dancing or running).

Some of the issues are as follows.

Plantar Fasciitis (With or Without Heel Spur)

Metatarsalgia / Pain at the Ball of the Foot

There are many common lower leg and knee problems and they can be experienced by people of various ages. Some of the issues are as follows.

Orthotics to reduce pain in the back

There are often links in low back problems and poor foot function.

Research has shown a 34% reduction in back pain with the use of orthotics noted in the reference below. The effect of your foot strike is even felt up in your jaw with the approximately 3G's of force experienced at the foot during running becoming a 0.3G's of force at the jaw. So the more overload that occurs in your feet, the more overload occurs up in the rest of your body.

There can be a lot of complications in body mechanics with over pronation or supination of the foot, from excessive muscle loading to poor joint alignment. Considering the many links between bones in the body, compensation from the foot up will be experienced in the majority of people due to the high prevalence of inefficient foot mechanics. Orthotics therefore can have as significant benefit to the musculoskeletal system as glasses do to the public's visual systems. See the image below for an illustration of how more pronation on one foot effects the leg and low back. 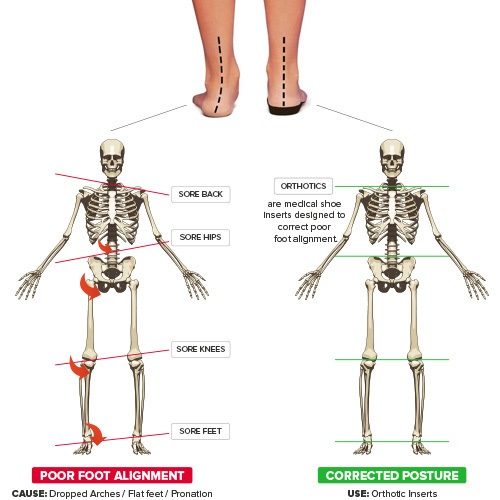